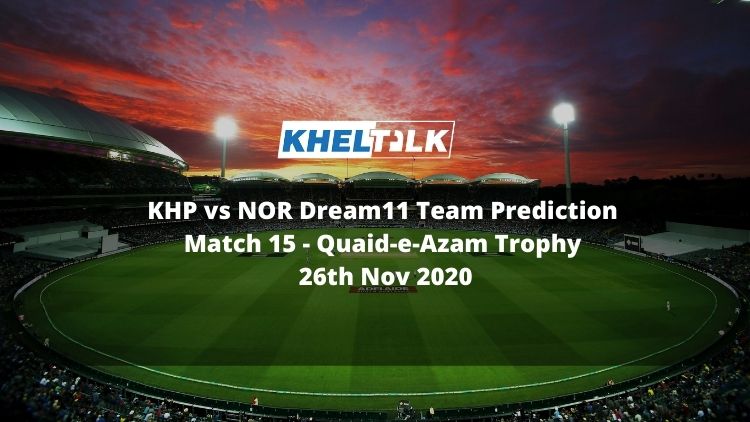 Going by the recent matches, the pitch has improved a lot to assist the batsmen more. In the last two matches, the team batting first has managed to reach 350+ comfortably.

Matches played in this tournament: 4
Matches won by the chasing team: 2
Matches are drawn: 2

KHP vs NOR Dream11 Team News:

KHP vs NOR Dream11 Prediction, Line-Ups:

Captain Pick for KHP vs NOR Dream11 Team

Nauman Ali is the 2nd leading wicket-taker of the tournament currently. He has 29 wickets to his name with the best of 7 for 53. He also has 94 runs in the tournament so far.

Sajid Khan is the leading wicket-taker of the tournament at the moment, thanks to his 10-wicket-haul in the last game. He also has scored 86 runs with the bat and is undoubtedly one of the popular picks for the captain.

Hammad Azam averages 68.33 in the tournament currently. He has 410 runs from his 4 matches and has four fifties, a ton to his name.

Adil Amin is the leading run-scorer for Khyber Pakhtunkhwa. He has 323 runs from his 4 matches with a best of 90. He has 3 fifties in the tournament so far.

Top Five Picks For KHP vs NOR Dream11 Team:

KHP vs NOR  Dream11 Team Prediction: Who will win the match

Both the teams are looking in great touch and this match will be an interesting contest. In their last head to head, Khyber Pakhtunkhwa defeated the Northern with ease and they are likely to win here as well.