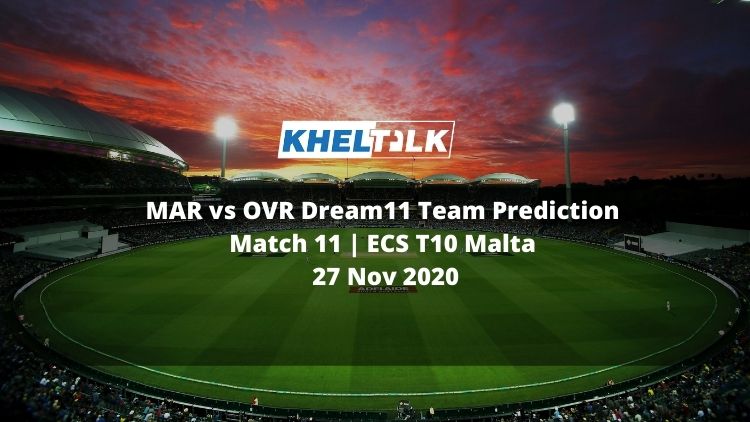 The 11th match in the ECS T10 Malta will be played between Marsa CC and Overseas CC on November 27 at Marsa Sports Club, Malta.AUM has played 2 games and is yet to register their first win while Marsa CC has played 2 games and has won 1 game and lost 1 match. So let’s look at the MAR vs OVR Dream11 Team Prediction, Top Captain & Vice-Captain Picks, Head to Head, Grand League, and Fantasy Tips.

A good track to bat on, the wicket will see the ball coming on the bat nicely. The bowlers will find it tough to control the runs on this pitch.

91 (In previous encounters at this venue)

N Khosla is an aggressive batter and the fact that he opens the innings makes him even more lethal. He can play the big shots and has the clarity of mind to take on the new-ball bowlers. In the first match, he scored 37 runs from 21 balls. The innings included 2 fours and 3 sixers and it reflected his big-hitting ability. So in this match too expect him to repeat his heroics.

Haroon Mughal is a must-have player in the team as he adds value in the batting as well as bowling department. He bats in the middle order and provides the flourish in the end and in bowling he helps the team with crucial wickets. In the last game, he scored 17 runs from just 6 balls including 2 sixes, and then came good with the ball too and claimed 2 wickets in 2 overs.

H Gericke has scored 51 runs in 2 games so far and has looked in good touch. He scored 40 runs in the first ball and faced 27 balls. In the second game too, he got off to a good start and scored 11 runs from 11 balls. He has a solid temperament and he can be expected to make another big score in this match.

J Hirschi is a must-have bowler in the team as he is very effective and bowls challenging lines and lengths for the opposition. He has picked up a wicket in both the games he has bowled so far. He has taken 2 wickets in 2 games so far and has always looked very probing in this league so far.

MAR vs OVR Dream11 Prediction: Who will win the match

Marsa CC is the better team between the two in terms of form and the quality of players. Hence in this game, MAR will be the winner.