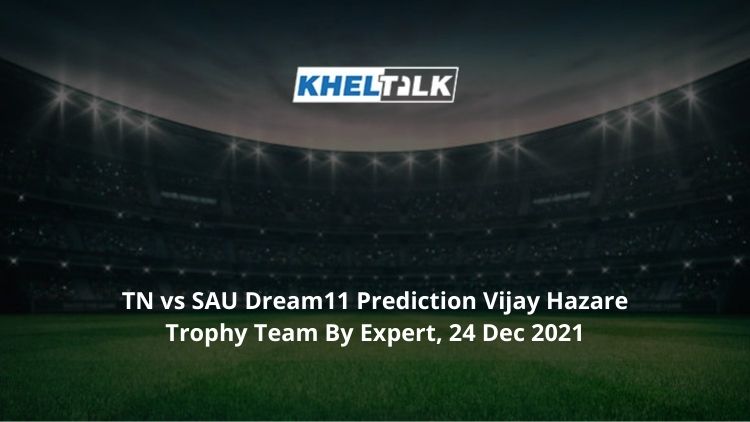 Tamil Nadu and Saurashtra will lock horns in the 2nd semi-final of the tournament. Tamil Nadu finished at the top of Group B with three wins from five matches and a good net run rate.

The team then went on to meet Karnataka in the Quarter Final. TN proved too good to them, as they defeated their arch-rivals by 151 runs.

On the other hand, Saurashtra is the only team to stay unbeaten so far in the tournament. The team finished with five wins in a row in the Group stages and then took down Vidarbha by seven wickets in the Quarter Final.

Going by what we have seen in the tournament, the death overs have really made all the difference, especially, in Tamil Nadu matches. This could be a similar day. Anything below 250 is easy to chase at this venue.

According to the forecast, the climate will be cloudy. The temperature will be 27 degrees Celcius and there is a good chance for drizzles but one can expect a full match here.

The team has a well-balanced line-up and they are likely to go in with the same line-up here. Aparajith will be opening alongside Jagadeesan while Ragupathy Silambarasan will lead the bowling attack

Most of the players in the team are in excellent form at the moment, especially, Prerak Mankad, who will open the innings for Saurashtra this time. The team is likely to put up a show and will look to keep their unbeaten streak alive.

Dinesh Karthik is the 2nd leading run-scorer for Tamil Nadu at the moment. The veteran has 229 runs from his five outings. He has two fifties to his name while striking at 90.87.

Shahrukh Khan has been the difference between Tamil Nadu and their opponents so far in the tournament. The attacking batter has 194 runs from five outings with an average close to 49. He has 16 sixes to his name.

N Jagadeesan will look to lead from the front here. He has 244 runs and is the leading run-scorer for Tamil Nadu at the moment. He had a ton in his last outing. Overall, Jagadeesan has 244 runs.

Sai Kishore is in good touch at the moment. The young all-rounder has eight wickets as well as 75 runs to his name. He scored fifty in the last contest.

Washington Sundar is the leading wicket-taker for Tamil Nadu at the moment. He has 15 wickets with a best of 5 for 48. He also has 77 runs to his name.

Mankad has been outstanding in this tournament. The opener has 339 runs with a ton as well as two fifties to his name. He strikes at 114.91 and has an average close to 113. Also, Mankad has six wickets to his name.

Batters–S Khan, B Indrajith, A Vasavada

Who Will Win Today Between TN vs SAU Dream11 Prediction, Today’s Match?

According to Kheltalk’s astrology TN vs SAU Dream11 Match Prediction, Tamil Nadu will begin this contest as favorites. One can expect them to dominate right from ball one. Either way, this is going to be a close contest. For Saurashtra, they need some early wickets to trouble the Tamil Nadu batters. Otherwise, it is going to be an easy run for them.

According to Kheltalk’s TN vs SAU Dream11 toss prediction, TN is likely to win the toss and opt to bat first at this venue. The team’s strength is their batting and they will look to make use of the conditions here.