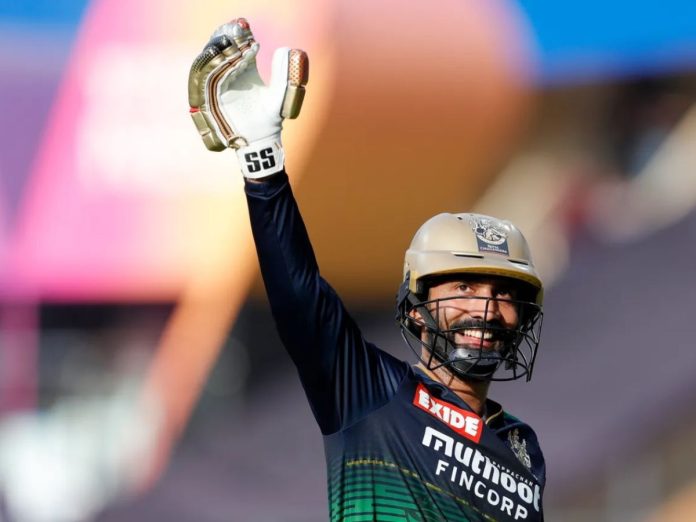 RCB skipper Faf du Plessis captained his team to a decent victory against Sunrisers Hyderabad. He played a remarkable knock of unbeaten 73 runs off 50 balls. Post-match, he said that there was a time during the game when he wanted to get retired in order to bring Dinesh Karthik on the field for batting.

Dinesh Karthik is in fierce batting form with the bat in the ongoing Indian Premier League. He is batting with a strike rate of above 200. And, he replicated the same in the match against Sunrisers Hyderabad. Karthik slammed 30 runs off 8 balls with the help of 4 maximum and a six.

He helped RCB in posting a mammoth total of 192 runs for a loss of three wickets. Post-match, Faf du Plessis said that they wanted Karthik to take the field as soon as possible. As per him, it was because the right-handed batsman is scoring runs at a good strike rate. The player revealed that he got very tired and wanted to declare himself “retiring out”

“If he (Dinesh Karthik) is hitting sixes like that, we want to get him in and bat as long as possible. He’s just so clear. To be honest, I was actually trying to get out because I was so tired, to get DK in. We were even contemplating – myself ‘retiring out’. And then, we lost that wicket,” he said.

“DK is in such good form. It was a tricky wicket. A lot of guys, their first few balls, they struggled. Lucky for us, there was a drop catch of DK and he just took them apart,” Du Plessis said after the match.

Faf du Plessis even mentioned that Karthik has filed his contention for the upcoming T20 World Cup and his name will certainly give a big headache to the selectors.

‘Dk’ has already accounted for 274 runs at an average of 68.50 and a strike rate of 200 with a top score of an unbeaten 66; he is definitely in the reckoning for T20 World Cup 2022 when the selectors sit down to pick the squad.