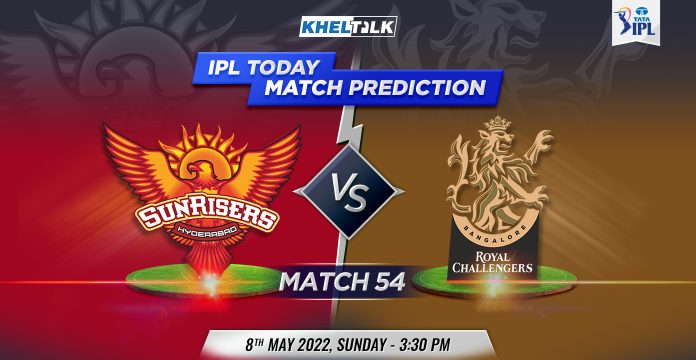 Welcome to the SRH vs RCB Today Prediction curated by Kheltalk cricket experts. Sunrisers Hyderabad will lock horns with Royal Challengers Bangalore in the 54th match of the TATA IPL, 2022 on Sunday, 8 May 2022 at the Wankhede Stadium in Mumbai. Keep on reading for more information on the SRH vs RCB game.

Sunrisers Hyderabad is eagerly awaiting their return to the winning ways after suffering three consecutive losses in a row. They slipped to the 6th spot on the points table after Delhi Capitals got the better of them in their recent game. They fell short of 21 runs while chasing a total of 207. Sunrisers pace sensation, Umran Malik pushed the speed gun several times but remained wicketless. Meanwhile their skipper, Kane Williamson has had a wretched IPL with the bat so far. His strike rate of 96.1 is the lowest among batters who have faced at least 100 balls this season.

Royal Challengers Bangalore had a tectonic shift back in the top four by defeating one of their arch-rivals, Chennai Super Kings by 13 runs. Led by a collective batting effort and Harshal Patel’s triple wickets, CSK was restricted to 160 in a 174-run chase. Mohammad Siraj will be the only concern for Faf du Plessis. The pacer has grabbed just eight scalps this season and has been leaking plenty of runs.

The last time the two teams met this season, RCB suffered a batting collapse as SRH bundled them out for just 68 runs recording the fourth-biggest margin of victory in IPL history. However, after a sudden dip in SRH’s form, they need to put their best foot forward as every match is a do-or-die situation from now on.

Top Batsmen for SRH vs RCB

Top Bowlers for SRH vs RCB

SRH vs RCB Today Match Prediction, IPL 2022, Who Will Win the Match?

Sunrisers have won the last four out of five games they have played against RCB including one this season. Their bowlers completely bamboozled RCB’s batting lineup. Meanwhile, RCB’s middle order has looked jittery this season and this is one of the major weaknesses of the team.

Will be added when there is an update.