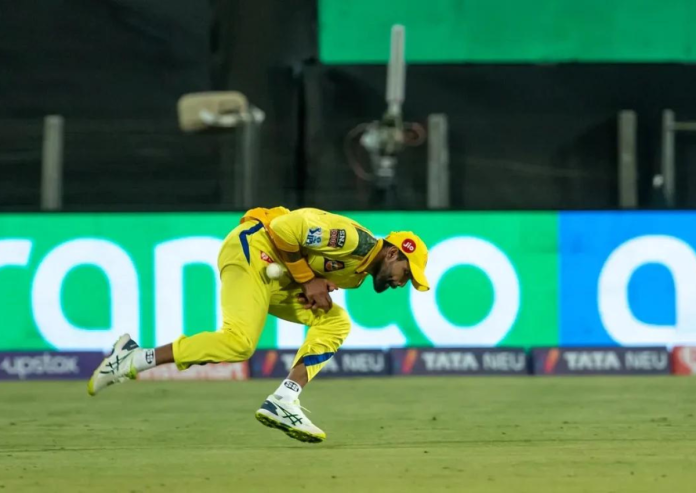 Chennai Super Kings all-rounder, Ravindra Jadeja is likely to be ruled out of the remainder of IPL 2022 due to an injury. According to a report by the Times of India, CSK management has decided not to risk Jadeja’s fitness due to which he was rested in the recent outing of CSK against Delhi Capitals on Sunday.

The former CSK skipper sustained an injury in his upper body while taking a catch in a game against the Royal Challengers Bangalore. It all happened when Jadeja ran forward to catch the ball but lost his balance while completing the catch and fell hard on the ground. He looked in a lot of pain and was immediately attended to by the physio.

Here’s how it happened:

Upon accessing the injury in the last couple of days, he hasn’t gotten any better and the team management might give him rest for the season. It is worth mentioning that the left-handed batter recently stepped down as the captain of the defending champions CSK after eight games and handed the baton over to MS Dhoni.

It has been a forgettable IPL for Ravindra Jadeja in all the departments. The 33-year-old has tallied 116 runs in 10 matches this season with an average close to 19. Meanwhile, with the ball, he has scalped 5 wickets including the best figure of 3 for 39. CSK will certainly miss him for his exceptional fielding skills as he is one of the most agile players on the squad.

Anyhow the season is already coming to an end for the defending champions as they are left with just three league games and are heavily relying on the fate of other teams. Super Kings have registered four wins in eleven games so far. They are currently placed at the penultimate spot on the points table.

Chennai Super Kings will square off against their arch-rivals Mumbai Indians at the Wankhede Stadium in Mumbai on May 12. Even if they manage to win all their remaining matches they would still be relying on mathematical possibilities to remain in the race for IPL Playoffs.