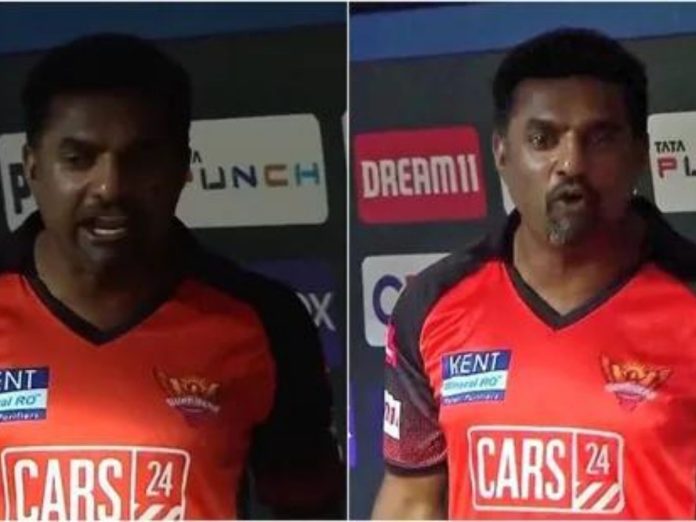 Sunrisers Hyderabad suffered a disheartening defeat against Gujarat Titans on the final delivery of the game. In the end, SRH’s bowling and strategic coach Muttiah Muralidharan was spotted showing his frustration towards the poor bowling by Marco Jensen in the final over of the innings.

Sunrisers Hyderabad posted a decent total of 195 runs on the back of a brilliant show by Abhishek Sharma and Aiden Markram with the bat. Coming down to chase, Gujarat Titans opener Wriddhiman Saha batted really well with the bat and scored a quick fifty. But, GT’s middle-order couldn’t replicate the good start as Hardik Pandya, David Miller failed to score well.

Muttiah Muralidharan vents out his frustration after SRH loses to GT

In the final over, Gujarat Titans needed 22 runs to win. Rahul Tewatia got off the mark in that over with a big six. He then took a single on the 2nd delivery and gave the strike to GT’s vice-captain Rashid Khan.

The leg-spinner smashed six off the third delivery but didn’t score a run on the 4th delivery. Finally, the equation came down to 9 runs off 2 balls and Khan went for back-to-back sixes finishing it off in style.

Meanwhile, SRH bowling coach Muttiah Muralidharan was spotted venting out his frustration in the dugout. The video of the same instance got viral in just no time. From Sunrisers Hyderabad, Umran Malik emerged as the star performer as he took a five-wicket haul in the match. He became the first bowler to have received Man of the Match being on the losing side.