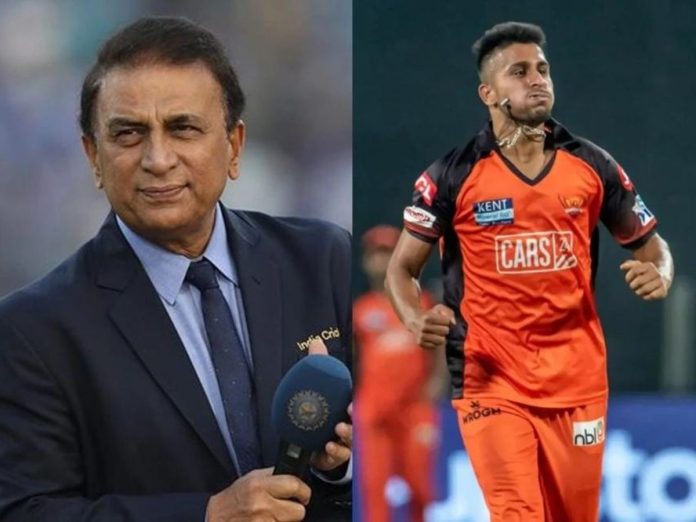 Former legendary cricketer Sunil Gavaskar wants selectors to pick Umran Malik for one Test and limited-over series to England. Umran Malik registered his maiden five-wicket haul in IPL. He achieved his IPL career’s best figures against Gujarat Titans and became the first bowler to get Man of the Match although he was on the losing side.

Umran Malik is having a dream run with the ball in the ongoing 15th edition of the Indian Premier League. So far, he has taken 15 wickets in 8 games. The right-arm pacer is consistently clocking deliveries of around 145 km/hr and above. The fast-bowler rattled the woodwork of four batsmen by beating them with his quick pace.

He clean-bowled GT opener Wriddhiman Saha, Shubman Gill, middle-order batsman David Miller, and Abhinav Manohar. Malik finished as the most economical bowler from Sunrisers Hyderabad in the game. And, former Indian cricketer Sunil Gavaskar is very much impressed with the rise of such a bowler from the IPL.

Sunil Gavaskar asserted on-air that Malik should be fast-tracked to Team India for a Test against England and limited-over series. As per him, although he will not get to play in the final XI. But, he will surely gain experience while sharing a dressing room with the likes of Mohammed Shami, Jasprit Bumrah, Umesh Yadav, and Mohammed Siraj.

India is scheduled to play one Test left of the previous series that was postponed due to COVID spread in India’s squad. Also, they are slated to play three T20Is and ODIs. The Men in Blue will go on a tour to UK starting with 2 game T20I series starting on 26th June in Dublin.