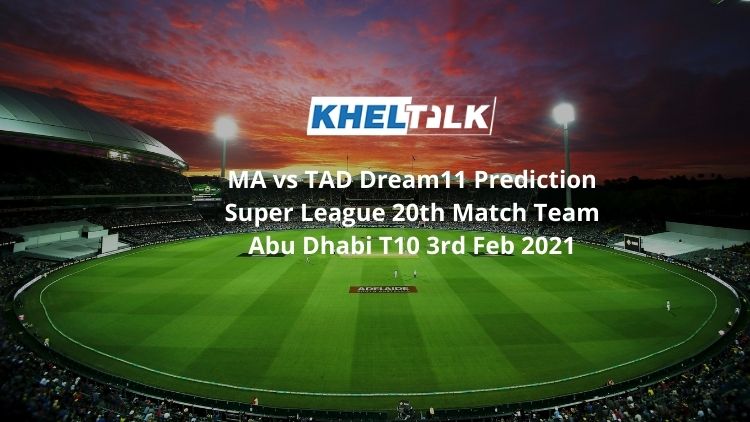 Here are the stats for the teams MA vs TAD

The flat wicket at Sheikh Zayed Stadium will come up with a lot of advantage to the batsmen. Spinners will effective in the latter part of the game.

Picking pacers in your fantasy team will not earn you enough points, rather go for spinners and top-order batsmen.

With just one win in three games, Arabians sits at the last spot of Group A points table and is yet to feature in the Super League group.

Arabians might make some changes for this game and they desperately need a win here.

Team Abu Dhabi is at the 4th position at the Super League points table with just one win in four games.

No changes are expected for the upcoming game. Batters have performed well but bowlers haven’t been impressive.

Abdul Shakoor has scored 107 runs in three innings for Arabians at an average of 53.50. Don’t miss him out.

J Clarke has been the go-to player for Team Abu Dhabi. Playing four innings, he has slammed 134 runs at an average of 44.66.

J Overton has chipped maximum wickets for the Team Abu Dhabi. Holding an economy of 13.20, Overton has bagged five wickets so far.

M Hafeez is another international stars in Arabians who can really make a difference. In three innings, he has scored 85 runs at an average of 42.50.

Ahmadzai must keep his economy under 10 to help his team notch the game in the second innings.

McCoy has been the most economical bowler for the side and is even capable of chipping important wickets.

Here is the Dream 11 Team prediction for MA vs TAD. We are going with players who are currently in good form and can win the match with ease.

Wicket-Keeper: B Duckett, A Shakoor

Who Will Win Today Between MA vs TAD Dream11 Prediction?

According to Kheltalk’s MA vs TAD Dream11 toss prediction, TAD will win the toss and will opt to bowl first.