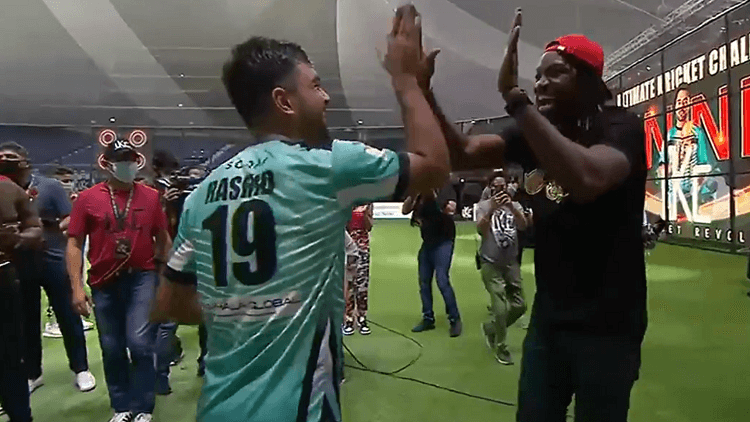 Rashid Khan, the Afghanistan leg-spinner is reckoned as one of the best turners of the ball in international cricket. He recently featured in the inaugural season of Ultimate cricket challenge alongside Chris Gayle, Kevin Pietersen, Andre Russell. Defeating them all, the 22-year-old emerged as the winner. And, after lifting the trophy, he was spotted flaunting dancing moves alongside Universe Boss.

UKC chairman Ravi Thakran announced that they have received good comments from the players and spectators. He feels that this format will certainly bring revolution in the cricket world. As per him, this tournament will never hamper the cricket calendar.

Rashid Khan received the trophy and started flaunting his dance moves. He also accompanied Chris Gayle and was spotted doing Bhangra steps with the latter.

Ravi also revealed that in the second edition the prize money will be USD 1 million and they will try to rope 6 more players in the tournament.

“UKC is a revolutionary format where players will go one on one against the best in the world. We have received great feedback from the players and viewers alike. The format allows an action-packed contest without any rain delays, affected by pitch conditions, and has a shorter snappier format,” said Ravi as quoted by MovieTalkies.

“UKC is about growing the sport of cricket and given the short length of the tournament; we can host multiple tournaments without disturbing the current cricketing calendar. Season 2 will have more than six superstars vying to be declared the real champ in a one-on-one format as well as USD 1 million as the winner’s cheque,” he added.

Rashid Khan will be soon joining the Afghanistan cricket team for the upcoming series against Ireland. He will be spotted donning the national jersey for the first time in the post-coronavirus era.