WATCH: Sreesanth Picks His 1st Wicket In Syed Mushtaq Ali Trophy And Thanks The Pitch After The Spell 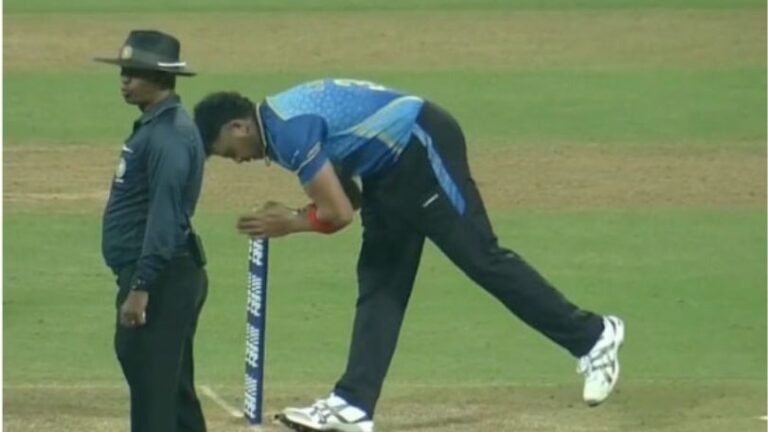 Back in 2013, Sreesanth was accused of doing match-fixing in an IPL game. The Indian pacer was soon handed a long ban by BCCI. He was even asked not to enter the cricket field by the Indian cricket board. However, earlier this year his ban was lifted and he was free to ply his traits in gentlemen’s sports. The Indian bowler soon hit the nets in order to get back into the grooves. Looking forward to the pace and swing, the Kerala cricket board picked him in the squad for Syed Mushtaq Ali Trophy. On the previous night, he played his first game after 2804 days and took only seven balls in order to take his first wicket.

Sreesanth did whatever it takes in order to get his ban lifted. He knocked on the doors of the courts and finally it was proved that he never did match-fixing in cricket. In an interview, Sreesanth said that he is aiming to mark his comeback in the national side before the 2023 World Cup. Also, Sreesanth boasted that he still has a lot of pace and swing left in his bowling.

He proved his statement right with his performance against Puducherry. The 37-year-old bowled brilliant outswinger to castle the stumps of Puducherry batsman Fabid Ahmed. It was so good that the batter himself was left dumbstruck and was analyzing where he went wrong while playing the delivery. Sreesanth bowled a decent spell and registered bowling figures of 4-0-29-1. The Kerala-born pacer got emotional and kissed the pitch with his hands.

Coming onto the international career of S Sreesanth, he has played 27 Tests, 53 ODIs, and 10 T20Is. Meanwhile, he grabbed 167 international wickets. The right-handed pacer also has the honor of winning two World-Cups in his short cricket career.