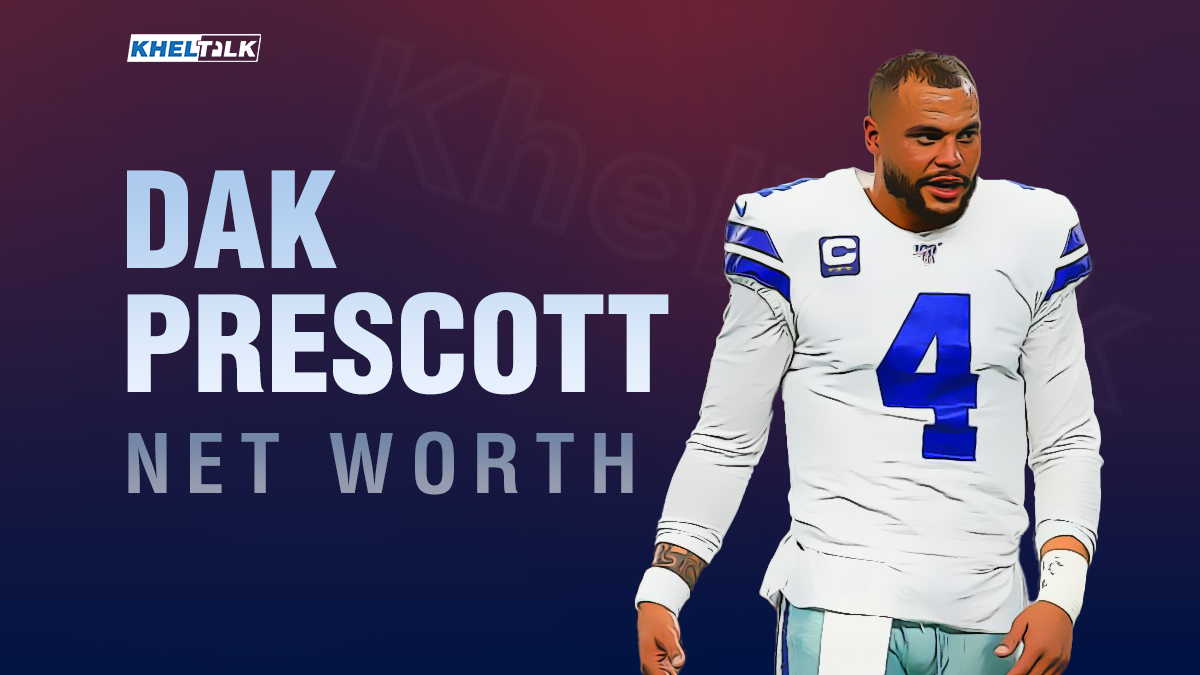 Rayne Dakota Prescott or better known as Dak Prescott is an American Football player who currently represents the Dallas Cowboys in the National Football League (NFL). Born on the 29th of July 1993, the 28-year-old plays as a quarterback. He was a Round 4 pick (overall pick: 135) of the 2016 NFL draft.

Prescott graduated from Mississippi State college and had been with the Cowboys since getting his break in the NFL. In his rookie year, he set a lot of records and was named the NFL Offensive rookie of the year.

In this article, we will have a look at Dak Prescott’s Salary, Net Worth, Personal Information, Family, Career details, Controversies, FAQs, etc

Net Worth: Dak Prescott’s Net Worth has been estimated to be between $70 million (USD). The estimate is the sum of his salary and his endorsements.

He has now signed a new deal with the Cowboys that would give him $160 million for a 4-year period. This also makes him one of the highest-paid players in the NFL.

The following are the brands that Dak Prescott endorses:

The house also reportedly includes an indoor sports simulator theater, a game room, an outdoor pool, and a custom field for football practice.

Dak Prescott was the 135th pick in the 4th round of the 2016 NFL draft and he was drafted to the Dallas Cowboys.

Professional career: After college Dak Prescott applied for the 2016 NFL Draft. He was picked by the Dallas Cowboys as a round 4/overall 135th pick.

Dallas Cowboys: After getting picked by the Dallas Cowboys in 2016, Dak played 16 games in his first season. He made his debut against the New York Giants on 11th September 2016. He had a wonderful first season and won the NFL rookie of the year award. He was also selected for the Pro Bowl team. He also played in the postseason for the first time in his NFL career

In 2018, he would qualify for his second Pro Ball game. He also won the player of the week award twice in the season. He solidified his position as an offensive quarterback in the 2018 season. This was the second time that he would play in the postseason.

Prescott finished the 2019 season with 4,905 passing yards, which ranked second in the league. He also had 30 touchdowns and 11 interceptions. But all of this didn’t matter in the end as the Cowboys missed the playoffs.

The Dallas Cowboys recognized his effort and placed the franchise tag on Prescott in 2020. This meant the player had a contract worth $31.4 million for the 2020 season. But Prescott could only play 5 games in the season owing to an injury. The player suffered a compound fracture and dislocation to his right ankle. This meant he had to undergo immediate surgery. This ended his season.

Dak Prescott signed a new 4-year deal worth $160 million with $126 million guaranteed before the 2021 season. He also received a signing bonus of $66m which was the highest in NFL history. He has played 10 games since returning from the injury. His first game after injury was against the Tampa Bay Buccaneers.

(*) The Player has played all the seasons with the Dallas Cowboys

In his stellar career, Dak Prescott has had the following achievements:

Now that we know about his football career, Let’s have a look into a few details of Dak Prescott’s life.

Natalie Buffet: Prescott’s relationship with buffet came to light in 2020 after she posted an Instagram post of them together. It is not known when and where the couple met. Natalie Buffet is from Florida. She has done civil engineering from Southern Methodist University.

The couple is still dating but is not engaged together. They do not have any children.

Lauren Holley: The NFL player reportedly dated the model in 2019. But the relationship fizzled down.

He has also been linked with Ireland Borba, Estrella Nouri, Yasmine Lee, and Kayla Puzas in the late 2010s.

Dak Prescott has been active on Social Media and posts pictures and videos regularly.

Dak Prescott is arguably a very good football player. But he has faced a few problems off the field.

Getting Jumped at a concert: During his college days, Prescott and a couple of his fellow Mississippi state teammates were attacked by a group of people at a concert. The young Prescott suffered cuts on his body after being hit by a beer bottle. But the player and his teammates did not press any charges after the incident.

Dak and his girlfriend have not commented on the incident.

Q- What is Dak Prescott’s religion?

Rosen is a devout Christian.

Q- Who are Dak Prescott’s parents?

Nathaniel and Peggy Prescott are the parents of the Quarterback.

No, but he is currently dating Natalie Buffet.

His elder brother killed himself. The reasons were not disclosed.

Q- What are Dak Prescott’s hobbies?