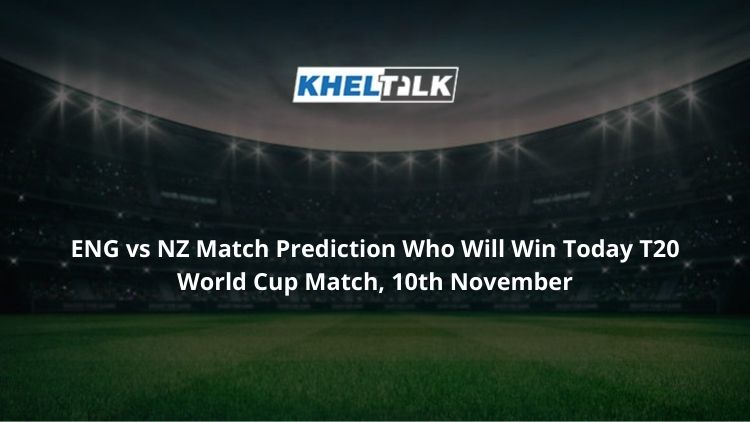 KhelTalk is the only destination that brings you the finest today’s match prediction that you can trust. We are here for ENG vs. NZ Today Match Prediction, T20 World Cup, Online Cricket Betting Tips, which will provide every user with a clear picture of which team and in what aspect they can place their bets.

New Zealand has again reached semi semi-finals of the T20 World Cup for the 2nd consecutive time and ironically will face the same England who defeated them in the 2016 T20 Semi-Finals and also shattered their dreams in the finals of the 2019 50-over world cup. New Zealand is always praised for their collective performances rather than dependent on one megastar and again they have followed the same template.

New Zealand didn’t have the best of starts to the tournament as they lost both Warm-up games and lost the first game also against Pakistan. They have turned things around terrifically and their spinners have played an instrumental role with both Ish Sodhi and Mitchell Santner have been consistently creating problems in middle overs. New Zealand don’t have a good record against England but will fancy their chances given their recent track record in UAE.

Top Batsmen in the tournament

Top Bowler in the tournament

England suffered defeat in the last match against South Africa which might not be a big alarming signal but the injury of Jason Roy is a big blow for the English side. James Vince is roped in as replacement but is unlikely to directly slot into playing XI as Sam Billings looks most likely contender given the recent form of him.

England has a really balanced side but their batting department looks less threatening as compared to their bowling department. They heavily depend on Jos Buttler and other batsmen don’t yet to come to the party. Mark Wood who came as a replacement for Tymal Mills did go for big runs but Abu Dhabi’s pitch is most likely fit for him. England was runner-up for the last T20 World Cup edition and will look to go all the way this time.

Top Batsmen of England in this tournament

It is a night game and dew is going to play a big part here. The temperature will be around 27 degrees which are lower than the usual Abu Dhabi temperature. High wind speed will give some assistance to seam bowlers in the first innings.

Pitch in Abu Dhabi has been a paradise for batting lately and India even scored 200 plus runs here against Afghanistan. Dew plays a big part here and the chasing team always has a big edge here. Seamers will have a big role in powerplay overs. Average score will be around 170 runs.

ENG vs NZ– Who will win the match, Today Match Prediction:

England expected to win the match against New Zealand

KhelTalk experts feel that England will win against New Zealand. England is arguably the best white-ball team in the world and again in this world cup, they have been fantastic. Although Jason Roy’s injury is a big setback for them, they have enough gas in the tank to take down mighty kiwis who will be looking to take revenge in 2016 and 2019. Both teams look balanced on paper but England might have an advantage over New Zealand because of their head-to-head supremacy over them and experience of tough games. We think England will come out top in this match against New Zealand.

Jos Buttler has again been instrumental for England at top of the order. The biggest plus point for him is that he has scored on tough surfaces against quality spinners and Abu Dhabi’s pitch is going to be a batting paradise for him. Jos Buttler is a 360 Degree player and has all shots from the book. He has scored 240 runs and is the tournament’s 2nd highest run-scorer. Jos Buttler is one World’s best openers in this format and can give you big returns. He is our pick for best batsman from England.

Martin Guptil didn’t have a good record in sub-Continental conditions before coming into the World Cup but he has been really impressive this time around. His innings of 92 against Scotland was a template for openers on approaching innings in these conditions. Martin Guptil is an experienced campaigner and is playing in the 6th T20 World Cup and will look to give a blistering performance in this knockout game. He can give you good returns from this match and is our pick for the best batsman from New Zealand.

Tim Southee has been an underrated gem for New Zealand in this tournament. All teams keep the focus on Trent Boult and Spin twins of New Zealand’s but it is the Southee who has been hunting big fish for them. Against India, he trapped KL Rahul and Against Pakistan, he cleaned up Babar Azam. Southee uses all his experience to perfection in these conditions and can have a big impact in this match. He can give you good returns from this match and is our pick for best bowler from New Zealand.

Adil Rashid started the tournament with a bang and clinched 4 wickets in his first game only. He has carried his form from then on and has been symbolic for England throughout the middle overs phase. Eoin Morgan uses him as an attacking wicket-taking option and so far Adil Rashid has lived up to expectations. He is a smart bowler and Abu Dhabi’s pitch is going to be a bigger challenge for him but he has got all the skills required to overcome this challenge. Adil Rashid is our pick for best bowler from England.