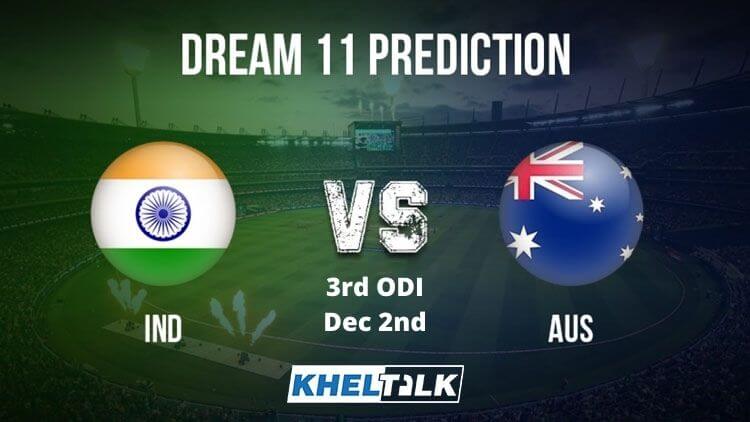 Mighty Australia has seriously dominated Men in Blue in the ongoing ODI series. They defeated the visitors by a big margin of 66 runs in the series opener followed by another emphatic win by 51 runs. Now, it will be the turn for Team India to make a shot at a consolation victory. Virat Kohli & Co. have already lost the series and will come out in search of a win in order to avoid the whitewash.

Also, the fans can witness some big changes on both sides. David Warner and Pat Cummins have already been ruled out from the tournament. And, D’arcy Short is expected to open for Aussies. Meanwhile, Team India will be tipped to make some changes in their bowling unit. Let’s see if a good match is on the cards or once again hosts will dominate the Indian cricket team. Let’s go through our Dream11 Team Prediction for the 1st ODI between India and Australia.

The conditions at Oval is expected to go in favor of the bowlers. And, batsmen will have a tough time facing the fast-bowling spearheads. But, bowlers will have to be very precise with their bowling length in order to get wickets. Otherwise, they will fail to churn out success on the bowling friendly wicket.

Virat Kohli has set a high benchmark in front of the fans. And, in the previous game, Kohli showed why he is reckoned as one of the best in the world. He missed his ton by 11 runs and will be eager to register his first of this series in the upcoming affair.

KL Rahul scored a decent knock in the previous game by coming out in the middle-order. However, in the upcoming game, he might get an opportunity to bat at his favorite opening position. And, fans can expect a scintillating performance from the right-handed batsman.

Steve Smith has already found his peach form with the bat. And, he looks pretty much unstoppable in the ongoing ODI series. He has notched back to back tons and will aim to score his third consecutive in the upcoming one-day international. It will be interesting to watch if he can create a record by scoring three consecutive tons or not.

Aaron Finch has done an impeccable job as a skipper against Team India in the ongoing ODI series. He smashed his 17th international ton in the 1st ODI and will look to end his series on a high note.

Australia has a big opportunity in its hand to whitewash Team India in the ongoing ODI series. However, it will not be a cakewalk for the hosts. Our experts feel Men in Blue will mark a strong comeback in the upcoming game by bringing Australia’s winning momentum to a halt.