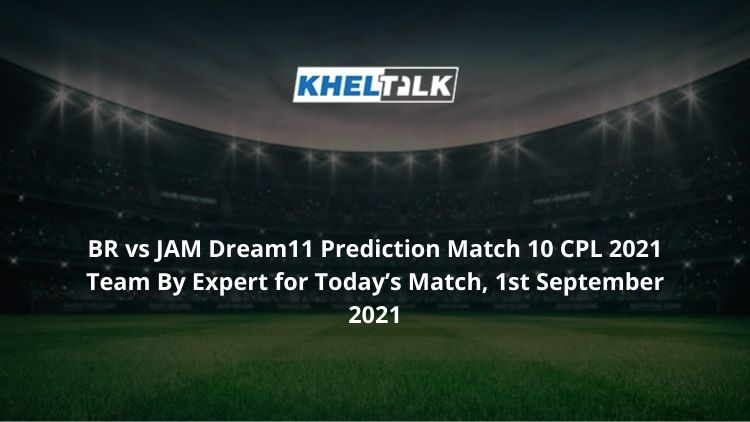 Barbados Kings will play their four contest in the tournament and they will take on Jamaica Tallawahs once again. Both teams had locked horns a few days ago. Barbados Kings had won that contest which was their first win in three matches. The team made 161, thanks to Glenn Phillips’ fifty and Riefer’s brisk cameo. Tallawahs had failed to chase the same and fell 15 runs short of the total.

That was Tallawahs’ first win in the tournament. They had played only two matches so far but had won the first one by a huge margin, so much so that they are currently at the second spot in the points table. They will look to bounce back in this contest.

This is a batting-friendly track. Most of the teams have batted second at this venue. There will be something for the spinners as well. One can expect both teams to go for an extra all-rounder in this contest.

The team will call for some consistency in this contest. They did have some honourable performances so far and one can expect them to do well here too. Phillips will once again lead the batting department while Holder will be the player to watch out for here.

The team needs something big from Andre Russell and Carlos Brathwaite in the batting department. Russell was outstanding in the first contest but he couldn’t do much in the second. He will be the key going into this contest. Also, Pretorius will lead the bowling attack in this contest.

Andre Russell needs no introduction. The veteran all-rounder will have additional responsibility in this contest as there is no Glenn Phillips. He will be the player to watch out for here. He had a fifty in the first match of the contest.

Carlos Brathwaite is likely to play this contest and if he does, he is a must-have pick here. He will be opening the bowling for the team. However, he is yet to perform big in the tournament. One can expect something special from him here.

Chris Green will enjoy bowling on this surface. One can expect at least a wicket from the Australian and also, the team might promote him up the order to give them a brisk start.

Glenn Phillips was the star performer in the last contest. He had managed to score a fifty on this surface, against the same opponent and one can expect the same from him today as well.

Reifer was the player of the match in the first contest. He had managed to score a cameo as well as had a three wicket-haul in the last match against the same opponent. He is likely to do well here too.

Shai Hope is yet to perform big but had shown a glimpse of form in the first match. He is likely to add 20 to 30 runs to the total in this contest. He is our trump card pick for the contest.

Who Will Win Today Between BR vs JAM Dream11 Prediction, 10th match?

According to Kheltalk’s astrology BR vs JAM Dream11 match Prediction, Tallawahs will begin this contest as favorites. They have a strong line-up compared to their opponents in this contest. They will look to bounce back in this contest after losing their previous one.

According to Kheltalk’s BR vs JAM Dream11 toss prediction, the Kings will win the toss and will bowl first here. The team has a good bowling line-up here. They will look to restrict their opponent and will look to chase down the total.