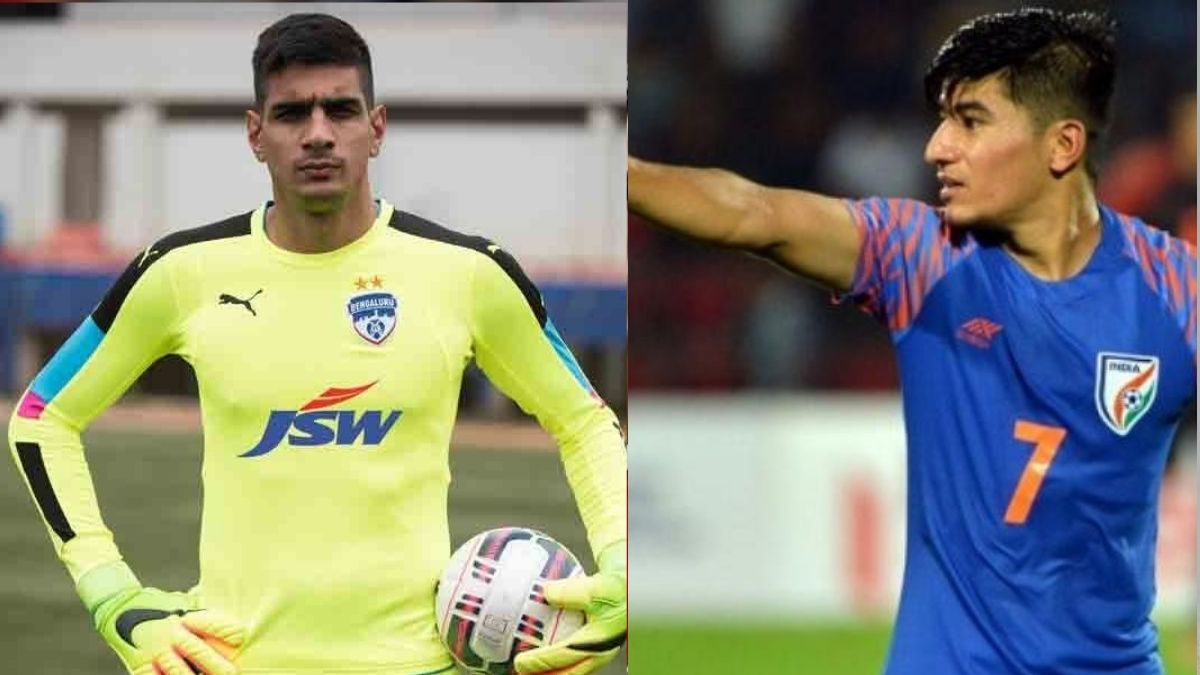 Indian Football has developed leaps and bounds in the past decade. The Indian Super League (ISL) was inaugurated in 2014 and it has helped take football to the next level. In the past few years a lot of young players have stepped up into the national team and a few older ones have cemented their legendary status. Here is the list of the Top 10 Indian Football professionals in the year 2021.

The 25-year-old Manvir Singh has been touted as the next big thing in Indian Football. Since Jeje Lalpheklua and Robin Singh fell out of form there had been a huge void in the National Team as there was no good enough replacement. The Punjab-born striker has stepped up in recent seasons to show that he is one of the Best Indian Strikers currently available.

Manvir trained at the Minerva Football Academy in Punjab and made his professional debut with Minerva Punjab FC in 2015. His versatility in the attack has been his greatest virtue as he can play both as a Centre forward and a winger.

Sahal Abdul Samad was born and raised in Al Ain, UAE. His roots are from Kerala, India and hence he chose to represent the Indian National team. He started his youth career at Al-Ethihad Football Academy in 2012. After completing his schooling he moved to Kannur, Kerala for further studies and to play University Football.

He signed for Kerala Blasters FC in 2017 and has represented both their main team and reserves team. He has also represented Kerala in the Santosh Trophy tournament. In 2019, he was called up to represent the Indian U-23 side. Since then, Sahal has gone on to represent the Blue Tigers as well.

Sahal was honored as the ISL’s Emerging player and the AIFF Emerging Player in 2019.

The 28-year-old versatile defender hailing from West Bengal is currently one of the best defenders in India. At present, He plies his trade for the Indian Super League side ATK Mohun Bagan. The defender made his debut in the 2011/12 season with the I-League side Pailan Arrows. He is the first choice Right Back for India currently and has also played as a Centre Back for the national team. He has also plied his trade with the Indian U-19 and U-22 sides.

Kotal has won the Indian Super League title twice with ATK in 2016 and 2020 and has also won the I-League title with Mohun Bagan AC in 2015.

The 24-year old Chhangte who hails from Mizoram is the first choice left winger for the Indian National team. Lallianzuala Chhangte was picked up by DSK Shivajians Liverpool International Football Academy in 2014 through which he even trained at Liverpool’s Kirkby Academy in 2016.

Lallianzuala Chhangte made his professional debut for North East United FC in the 2016 ISL season and instantly turned heads with his pace and skill. His biggest move yet came in 2019, when he signed for the two-time ISL Champions Chennaiyin FC. There he formed a lethal partnership with Valskis and Schembri in the first season scoring 7 goals in the process.

Chhangte also tried out at Norwegian Side Vikings FC in 2019, but couldn’t materialize a permanent deal with the Club. He is currently one of the biggest fan favorites at Chennaiyin FC.

Rowlin Borges is arguably one of the best Defensive Midfielders in India currently. The 29-year-old Mumbai City FC superstar hails from Goa and is the first choice CDM for both his club and the Indian National Team.

Borges was named as the AIFF Emerging player of the year in 2016. In 2021, he won both the Indian Super League and the Table Toppers Shield with Mumbai City FC.

Amrinder Singh is a 28-year old Goalkeeper from Punjab who currently represents the ATK Mohun Bagan Side in the Indian Super League. He represented the Punjab Football Association’s U-17 and U-19 team before moving to the Pune Academy to start his professional footballing career.

He made his Professional debut for Pune FC in a 2011 Federation cup game against East Bengal. He made his Indian Super League debut with ATK FC in 2015 before moving to then I-League side Bengaluru FC.

In 2017, Amrinder moved to Mumbai City FC where he cemented his legacy as one of the best Indian Goalkeepers. He was also given the Captain’s armband during his tenure with the club. In the 2021 summer transfer window, Amrinder Singh joined ATK Mohun Bagan on a 5-year deal.

Amrinder Singh has won both the I-League and ISL Golden Glove while playing in the respective leagues. With Bengaluru FC, he has won the I-League (2016) and Federation Cup (2017) titles. In 2020/21 the Goalkeeper successfully led his Mumbai City FC side to the Indian Super League and the Table Toppers Shield.

The 23-year old Chennaiyin FC midfielder is one of the most sought-after midfielders in India currently. Thapa is the heartbeat of the Indian Midfield and has already played crucial roles for both his club and country.

The young Uttrakhand-born footballer started his youth career in Chandigarh before being selected to represent the U-14 Indian national team. Thapa then moved to the AIFF Elite academy where he also captained the I-League U-19 side.  He was also selected in 2016 to train with french side FC Metz.

He made his Professional debut for Chennaiyin FC in 2016, before being sent to Minerva Punjab on loan after the conclusion of the ISL season. Thapa is known for scoring crucial goals as he has scored in the Semi-finals of the Indian Super League on two separate occasions for Chennaiyin FC. He also scored in the AFC Asian Cup match against Thailand for the Indian National Team.

The 29-year old Shotstopper is probably one of the best Goalkeepers India has ever produced. Gurpreet Singh Sandhu is the first Indian player to represent a club in the Europa League when he played for the Norwegian club Stebæk.

In 2011 he made his professional debut for East Bengal, from where he moved to Stebæk in 2014. In 2017, Gurpreet joined the Bengaluru FC side which was going to make its debut in the Indian Super League.

Gurpreet made his debut for India in 2011 against Turkmenistan in the AFC Asian cup. In 2018, he was called up again for a World Cup Qualifier game and has been the first-choice goalkeeper for India since then, also captaining the National team on many occasions.

On a personal note, Gurpreet has won 2 Golden Gloves in the Indian Super League and has also been awarded the Arjuna Award in 2019

The 28-year old defender made his professional debut for United Sikkim in 2012. He has played a lot of games in the Indian circuit and is best remembered for his time at Kerala Blasters FC. Jhingan signed for the Blasters in 2014 and was the emerging player of the Indian Super League in its first-ever season. He became the captain of Kerala Blasters in the 2017 season but was not able to lead the club into the playoffs. In 2020 he signed with ATK Mohun Bagan, where he lost the finals of the 2021 ISL season to Mumbai City FC.

In the summer of 2021, Jhinghan transferred to the Croatian club Šibenik.

In 2020, the government of India also awarded the Arjuna award to Sandesh Jhingan

Arguably the most well-known player in Indian football. Sunil Chettri has cemented his legacy in the history books of Indian and World Football.

The 37-year-old is still going strong captaining both his club and national teams. Chettri made his professional debut in 2002 for Mohun Bagan and has been to Portugal and the United States to play Club football since then. Chettri made his national team debut for India in 2005 and has won two SAFF Championships and the AFC Challenge Cup 2008.

Chettri is the Indian with the most goals in the Indian Super League and is also the third-highest active International goalscorer in the world behind Cristiano Ronaldo and Lionel Messi.

Chettri has won the I league title four times, with Dempo, Churchill Brothers, and Bengaluru FC.

He has also won the Indian Super League 2018/19, Hero Super Cup 2018, and two federation cup titles with Bengaluru FC. His biggest achievement with BFC arguably was finishing runner-up in the AFC Cup 2016.

Sunil Chettri has been awarded many Personal accolades including the Arjuna Award and the Padma Shri from the Indian Government.