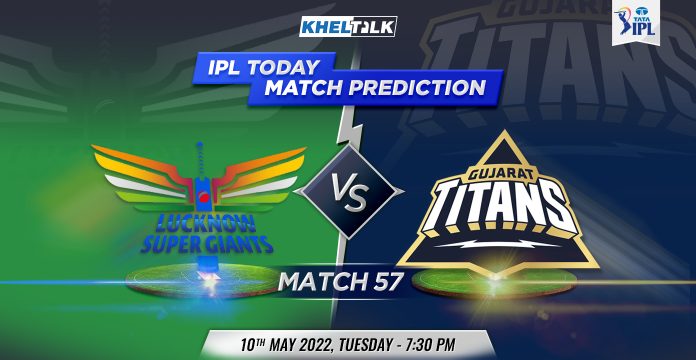 Welcome to the LSG vs GT Today Prediction curated by Kheltalk cricket experts. Gujarat Titans will battle against Lucknow Super Giants in the 57th match of the TATA IPL, 2022 on Tuesday, 10 May 2022 at the Pune Stadium. Keep on reading for more information on the LSG vs. GT game.

Lucknow Super Giants are one win away from sealing their playoff berth of playoff and probably their official stamp for a top 2 finish. They are in unbelievable form at the moment and have won 4 matches on the trot and all of them have come while defending. Lucknow completely looks unbeatable at the moment and would want to seal their berth early and rest a few key players in coming matches. However, it will be a match of revenge for Lucknow as Gujarat gave them the tournament’s first defeat in their inaugural match.

Gujarat has now lost two games consecutively and there might be little sign of tension in their dugout as they don’t have the best run rate and the remaining matches are against tough teams. Gujarat is also one win away from clinching a spot in the playoffs but would need to be on top of the game if they want to defeat Lucknow. For Gujarat, their bowling needs to step up and roll back to its top form.

There will be a clash of leaders in this game and the team which will win the game is likely to finish at the top of the league. Considering the recent form of Lucknow Super Giants, they are big favorites for this game.

Top Batsmen for LSG vs GT

Top Bowlers for LSG vs GT

LSG vs GT Today Match Prediction, IPL 2022, Who Will Win the Match?

Lucknow Super Giants are at top of their form at the moment and are running fast in the last 4 games after shifting to fourth gear in the crucial stage of the tournament. In every game, they have found new heroes in the last game, it was Stoinis and de Kock who led the charge. They also have the most lethal attack in bowling and are clear favorites for this clash at their biggest hunting ground.