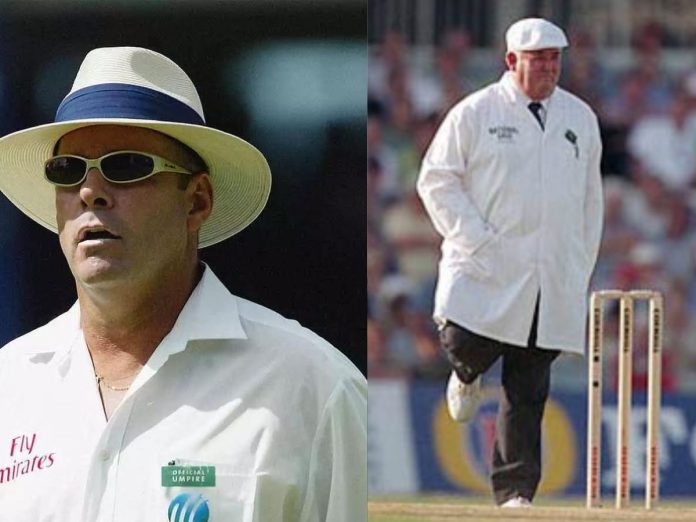 Probably one of the most difficult and crucial parts of any sport is umpiring. And the stakes of error are high when you have to judge if a batsman has slightly edged the ball from 22 yards away. In a game of cricket that has so much craze, they are heavily criticized for a mistake but hardly praised for a correct decisions.

The game of cricket has seen various technological advancements but a lot still depends on the onfield umpire. Now that the DRS (Decision Review System) is introduced the umpires are pushed more into the spotlight. They are always expected to give out the right decision every time, irrespective of the intense pressure from the fans and players.

Despite all the hardships that come with the role of an umpire, it one is of the most popular professions in cricket. It requires intense focus and indomitable decision-making that is rarely seen in any other profession. In the world of cricket, a good umpire is not the one that gives correct decisions every time but the one who makes the least mistakes.

Read on to discover more about such legends that have had a distinguished and prolonged careers as an umpire. This includes some of the best cricket umpires of all time that made history and had a major impact on the game.

Born in Adelaide, Australia in 1951, Daryl John Harper attended Norwood High School and later took up primary school teaching. He had a brief career as a football referee before an injury forced him to quit.

Harper made his first-class umpiring debut in 1987 and officiated his first ODI game in 1994. He was the first Australian to be included in the Elite Panel of ICC Umpires in 2002. He officiated close to 350 international matches during his 17-year tenure.

In 2011, ICC announced that Harper was being stood down at the termination of his contract in July 2011. But earlier than that he was involved in a controversy during the India-West Indies Test series. Following heavy criticism from India on his performance in the first Test at Kingston, he was forced to premature retirement.

The veteran received the ICC Bronze Bails Award for umpiring in 100 ODIs. He currently stands at the 4th spot for most matches as an umpire.

Kumar Dharmasena was born in 1971 in Colombo, Sri Lanka. He started his cricketing career as a teenager at Nalanda College in Colombo. The right-handed batter made his international debut in a Test against South Africa in 1993. After being an integral part of the Sri-Lankan ODI squad for 11 years, he retired from competitive cricket in 2006 to pursue a career in umpiring.

Dharmasena made his international umpiring debut in 2009 overseeing the ODI between India and Sri Lanka. He also umpired at the 2011 Cricket World Cup and was appointed to the Elite Panel of ICC Umpires later that year. The veteran was named the Umpire of the Year at the 2012 ICC Awards, for which he received the David Shepherd Trophy.

The Sri Lankan was selected as one of the umpires to officiate matches during the 2015 Cricket World Cup and also umpired in the final. In doing so he became the first to play in and umpire the World Cup finals. He also stood in the final of the 2016 ICC World Twenty20 and 2019 World Cup.

In the 2019 World Cup final between England and New Zealand, he faced the heat of the fans over a mistake. He awarded England six runs instead of five for overthrows, and that proved crucial to the result. Later he admitted the error but said he did not regret it.

Also known as the “Gunner”, Ian James Gould served as the gloveman for England in the 1983 World Cup. He played 18 ODIs for England but did not have a moment of glory at the international level. Later he was appointed to stand in 3 matches of the 2007 Cricket World Cup in West Indies.

Gould was promoted to the ICC Elite Panel of Umpires in 2009. The veteran also officiated the high voltage India vs Pakistan semi-final at Mohali in the 2011 Cricket World Cup. He umpired more than 100 ODIs and 50 Tests from 2006 to 2019.

In July 2019, he retired as an umpire, after standing in his 140th ODI match. However, in January 2020, Gould was named as one of the sixteen umpires for the 2020 Under-19 Cricket World Cup tournament in South Africa.

Erasmus began his umpiring career in a T20I fixture between South Africa and Australia at Johannesburg in 2006. He was also a part of the panel of umpires selected to stand in matches during 2011, 2015, and 2019 ICC Cricket World Cup.

In 2016, the South African won the David Shepherd Trophy for the ICC Umpire of the Year and became the first South African to win the prestigious award and repeated the same feat in 2017 and 2021. The veteran is also an on-field umpire for the ongoing 2022 season of the Indian Premier League.

Another household name amongst cricket fanatics is Aleem Dar. His playing career spanned a decade without ever really taking off. The Pakistani made his umpiring debut in 2000 in an ODI between Pakistan and Sri Lanka. He is still active after 22 years of service to the game.

The 53-year-old has officiated 279 ODIs and 164 Tests and 74 T20Is and is still going strong. The veteran won the David Shepherd Trophy three years in a row from 2009 to 2011, after being nominated twice in 2005 and 2006. In 2010, The Government of Pakistan honored him with the President’s Award for Pride of Performance.

In 2019, Dar surpassed Steve Bucknor’s record of most test matches as an umpire and later went on to break Rudi Koertzen’s record of officiating in the most ODI matches in 2020. Some of his standout gestures loved by the fans are his signal for fours with an economical wave and a nod before giving a batsman out.

Simon James Arthur Taufel was one of the greatest umpires of the 2000’s generation. Since the inception of the David Shepherd award in 2004, Taufel has won five consecutive awards until 2008. The Australian started umpiring at just the age of 24, after having to give up on his cricketing career due to an injury.

Despite being the youngest, his rise was so rapid that he quickly became one of the most experienced officials on the ICC’s Elite Panel. Respected by the players for his consistently accurate decision-making, Taufel stood in three World Cups and earned the chance to officiate in the 2011 final alongside Aleem Dar.

In 2012, Taufel retired at the age of 41, deciding to spend more time at home with his family. He also took up the newly-created role of umpire performance and training manager with the ICC until 2015. The 51-year-old is the s the youngest person to have received the ICC’s Bronze Bails Award for umpiring 100 ODIs.

Brent “Billy” Fraser Bowden is one of the most eccentric members of the umpiring fraternity. Debuting in 1995 in a match between New Zealand and Sri Lanka he rose to fame due to his unorthodox style of umpiring. The most celebrated styles of his signals are hopping on one leg for a four and the reach-for-Jesus signal for a six.

Suffering from rheumatoid arthritis, it was too painful for Bowden to signal a batsman out in the conventional fashion with a straight index finger raised above the head. This led to the infamous “crooked finger of doom”, a curiously bent finger to signal out.

From 2002 to 2013 Bowden remained an active member of the Elite Panel of ICC Umpires. Bowden was involved in an incident at the 2006 Brisbane Ashes test while standing at the square leg position where he was knocked to the ground by a ball hit by Geraint Jones.

In the 2007 Cricket World Cup final at Barbados, he was involved in the wrong decision that caused a farcical conclusion of the final between Australia and Sri Lanka.

Instantly recognized for his gentle nodding before raising the dreaded finger, Steve Bucknor became the first umpire to stand in 100 Tests. Making his debut in 1989, Bucknor also stood in five consecutive World Cup finals from 1992 to 2007 where he officiated 44 matches including five finals.

Known for his habit of taking his time before handing out the decision, Bucknor was a football player and referee and a high school mathematics teacher before becoming an umpire. It is worth mentioning that the veteran has also refereed in a FIFA World Cup qualifier in 1988.

Indians typically don’t like him a lot apparently for incorrectly giving marching orders to Sachin Tendulkar on many occasions. And above all, he was also involved in the infamous “Monkeygate” during India’s tour of Australia in 2008.

But all these controversies are assured to come with a career of two decades. Widely respected in the cricket fraternity, the Jamaican has received the ICC Bronze and Golden Bails award and the Order of Jamaica.

Harold Dennis “Dickie” Bird is inarguably the best cricket umpire of all time. Starting his career by playing for England in first-class cricket he made his international debut in umpiring in 1973. The Englishman was loved by everyone in the cricket world by fans, opponents, players, and experts during his 23-years of umpiring career.

Bird officiated 66 tests and 69 ODIs and managed to earn the respect of even some of the most hot-blooded players on the field with his humor. He was also one of the very few umpires to have a fan following of his own.

In his last game as an umpire in 1996, India and England formed a “guard of honor” for Dickie Bird. The Englishman received both the Member of the Order of British Empire (MBE) in 1986 and the Officer of the Order of British Empire (OBE) in 2012. The statue of Bird raising his index finger has also been erected near his place of birth in Barnsley.

The most influential and legendary name in the cricketing world has to be David Robert Shepherd. He was a fine batsman during his time and scored more than 10,000 runs in first-class cricket. After retiring from his playing career in 1979, Shepherd decided to become an umpire.

The Englishman made his test debut in 1985 during The Ashes in England. In his 22-year career, Shepherd officiated 92 tests and 172 ODIs. He became the first umpire to stand in for the matches of all test-playing nations and also got the opportunity to officiate three World Cup finals from 1996 to 2003.

Quite famous for his habit of lifting one foot off the ground whenever the score reached 111. His “Nelson” was considered unlucky for the batting side. A cheerful character on the field, Shepherd died of lung cancer in 2009.

Shepherd was awarded the Member of the Order of British Empire (MBE) in 1987, and he became the President of his home county club, Devon, in 2006. Leaving a mark on cricket umpiring later in 2003, ICC decided to name the award for the best umpire after him, “The David Shepherd Trophy”.