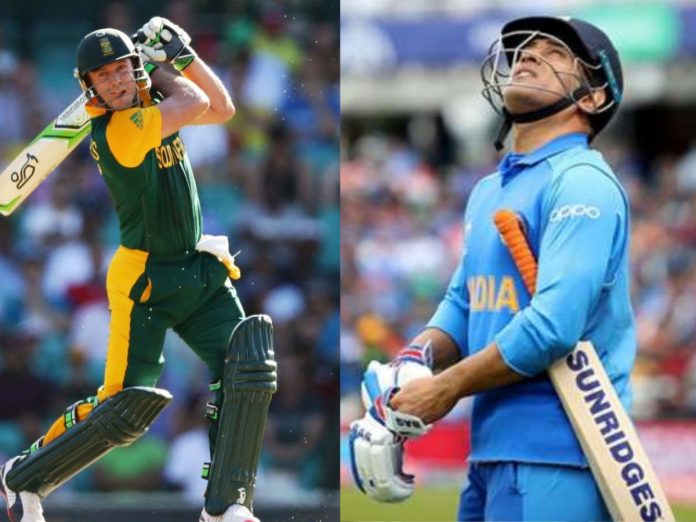 Cricket is an art in itself! Ask any cricket-crazy fan and they would tell you a hundred reasons why they enjoy the sport. No matter who it is, every cricket fan would certainly tell you that they enjoy close finishes. Games that go down to the last over or the last ball are very exciting and certainly make an everlasting memory.

Soaking up the pressure is not for everyone. Not every batsman can hit 12-20 runs in the last over and win the game for their team. Hence, in this article, we will look at 10 of the World’s best Finishers in Cricket. So without any further ado, let’s get into this list:

We start this list with probably the best finisher in the world of cricket, Mahendra Singh Dhoni. The former Indian captain has done it multiple times for his country and the Chennai Super Kings!

At the ripe old age of 40, Mahendra Singh Dhoni is still going all-out for the Chennai Super Kings even though he has retired from international cricket. He has numerous batting accolades including the fact that he has 10,000+ ODI runs even though he batted lower down the order. The chase in the 2011 ICC Cricket World Cup final is enough to explain why the Indian legend surely deserves to be number 1 on our list!

AB de Villiers was another top professional who was as cool as ice when it came to batting. Easily one of the best finishers in the world, The South African batsman has been nicknamed “Mr. 360” owing to his batting prowess.

Having played for South Africa between 2004 and 2018, AB de Villiers has 19,000+ runs in all formats for his nation. The batsman has chased down many targets and one of his biggest claims to fame was the fact that at his time, he was the only batsman who averaged over 50 and had a strike rate of 100+. The batsman proved himself in the IPL for the Royal Challengers Bangalore as well, but he has since retired from the game.

During the late 1990s, Australia had a certain Michael Bevan in their ranks who was arguably the best finisher in cricket at his time. The Australian international chased totals like it was absolutely nothing!

To many, Michael Bevan was “The Finisher” who actually brought the term into the game of cricket. The gritty Bevan used to get better under pressure and to add to this, he played a key part in the 1999 and 2003 World Cup wins for his nation!

The “Boom Boom” just defines what Shahid Afridi used to do in world cricket! Arguably the best finisher in the world for many, the Pakistani batsman would get going from the first ball! Having scored 10,000+ runs in all formats, Afridi was at his best in ODIs.

The Pakistani all-rounder has won games chasing in almost every tournament that you can name! But Shahid Afridi’s biggest problem was his consistency. The batsman would have arguably been number 1 if he had a bit more consistency in his game.

5. Michael Hussey- Best Finisher to play for Australia in Tests

Having taken the mantle after Michael Bevan’s retirement, Michael Hussey certainly never let Australia feel the need or miss their former finisher. Regarded as “Mr. Cricket” due to his calm personality and expert knowledge of the game, Michael Hussey was an expert finisher.

The Australian middle-order batsman played exceptionally under pressure situations. Owing to his batting prowess, Hussey was even given the opener slot for his franchise team the Chennai Super Kings!.

His skill was certainly unmatched by anyone in his country. Having scored 12,000+ international runs, the Australian national team has certainly missed Michael Hussey’s composure after his retirement.

Not many would expect a bowling all-rounder to be on the list of best finishers in the world, but Abdul Razzaq makes it to our list with ease! The Pakistan international has helped his team cross the line on multiple occasions owing to his pinch-hitting prowess.

His record of hitting 109* off 72 balls in a knock that included 10 sixes against South Africa in 2010 would certainly be the highlight of his batting career. Though his batting was unexpected and lacked a bit of consistency, Abdul Razzaq has certainly been one of the finest finishers for his country and the world of cricket

Vivian Richards was probably the Original Gangster when it came to finishing off games. The West Indian player was a superstar during his time! This is reflected by the fact that he has amassed 15000+ runs in his 18-year career spanning between 1974 and 1991.

The West Indian was greeted as a “superstar” wherever he went due to his batting prowess. Even though he was part of a bygone era, Vivian Richards had a strike rate of 90 in ODI cricket. Hence this explains why we have him on our list of the best finishers of all time!

The England batsman has come to his own in recent years for both his international teams and his franchise teams. Jos Buttler has truly adopted the art of finishing games and owing to this, the batsman has established himself in all the formats of the game.

Jos Buttler’s strike rate of 118 in ODIs and 141 in Test Cricket is a testament to itself. The batsman is easily one of the greats in modern cricket and this was seen in the 2019 ICC Cricket World Cup that England won. With a few more years ahead of him, Jos Butler can certainly rise on this list.

Another superstar who adopted the role of a finisher was Javed Miandad. The former Pakistan batsman played for his country in a career that spanned more than 20 years. Having started in 1975, Miandad was a huge part of the squad until 1996 when he eventually retired.

Javed Miandad’s batting prowess can be seen in the fact that he has well over 16,000 international runs to his name. Coming in to bat in the middle order, Javed Miandad was known to play gritty knocks and frustrate bowlers as he carried his team to the finish line.

One of the finest finishers in the modern game, Kieron Pollard is the last entry in our list of top ten finishers in the world of cricket. The former West Indies captain is a limited-over specialist and his strike rate of 94 in ODIs and 134 in T20Is is a testament to this.

One of the biggest reasons for Pollard making this list is the fact that he plays for multiple franchises around the world and does the same everywhere he goes. Kieron Pollard’s strike rate of 148.9 in the IPL with the Mumbai Indians just goes to show what the batsman is capable of if given a chance to get settled in a game!