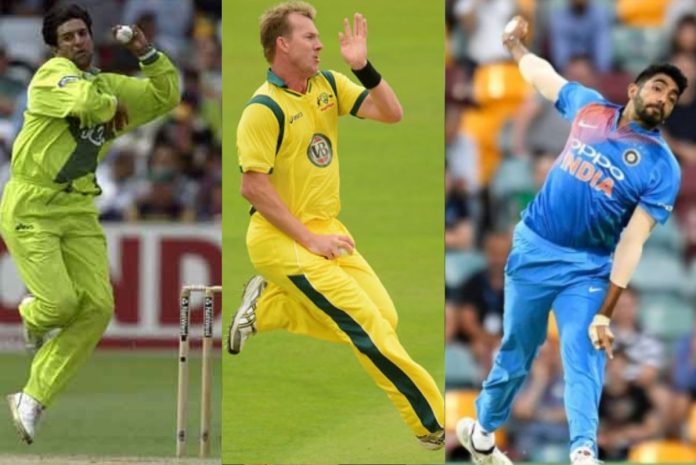 Being a fast bowler in the world of cricket is not just about throwing the ball fast!. But It is important that the bowler maintains their line and length and even has a lot of variations. Without proper line and length, the ball can be dispatched easily towards the boundary.

One of the greatest weapons of a fast bowler is the yorker. The yorker is basically a delivery that is aimed at the toes of the batsman. This is done to make sure that the batsman does not have enough room to hit a shot. This is especially valuable during the death overs when the batsman is looking to score a four/six in every ball.

In this article, we will look at the 10 best Yorker Bowlers in the world to ever grace the game of cricket.

Complete list of Best Yorker Bowlers in the World

The Sri Lankan bowler is probably one of the most well-known cricketers in the world. With his sidearm action, Malinga soon became the best yorker bowler of all time.

Having picked up this skill, Lasith Malinga picked up a lot of wickets in all formats of the game. During his day, Malinga’s yorkers were unplayable. Malinga helped Sri Lanka win multiple trophies over the years before eventually retiring in 2020.

The Pakistani bowler picked up 373 Test wickets and 416 ODI wickets and this was a testament to his longevity and skill. Waqar Younis would eventually retire in 2003 after playing the ICC World Cup for his nation.

The Rawalpindi Express is well known for his pace! Shoaib Akhtar has bowled the fastest delivery in world cricket. His delivery of 161.3 km/h still holds the world record, hence it can’t be argued how dangerous his yorkers would have been.

Having learned from Waqar Younis himself, Akhtar was a deadly yorker specialist. His figures of 6/11 in Test Matches and 6/16 in ODI Cricket cemented his legacy. Hence Shoaib Akhtar is easily one of the best yorker bowlers in the world.

Steyn-Gun, as he was known by the fans, left everyone in awe with his pace. The South African bowler picked up 439 Test Wickets in just 93 matches and this shows his prowess.

Dale Steyn was chiefly known for swinging the ball both ways. Hence this just made his yorkers even more lethal. Injuries eventually caught up to the bowlers and he has not played international cricket since 2020.

Another genius from Pakistan was Wasim Akram. Along with Imran Khan, Wasim formed a deadly attacking duo in Pakistan Cricket. The bowler played a key part in getting Pakistan the 1992 World Cup title as well.

Wasim Akram would then form another deadly trident with Shoaib Akhtar and Waqar Younis in the late 1990s as the Pakistan team would be known for their deadly bowling prowess. Hence Wasim Akram makes it on our list as the 5th deadliest yorker bowler of all time.

The Australian fast bowler is another member of this esteemed yorker club. Brett Lee was known for his good looks off the field. But the gentleman was a fierce competitor when he stepped onto the field in the famous yellow jersey.

Brett Lee picked up 310 Test Wickets and 380 ODI wickets in one of the most exciting times for World Cricket. Known for his pace and yorker ability, Lee would easily go down as one of the best yorker bowlers of all time.

The West Indian cricketer was absolutely ferocious with the ball! Bouncers, Short Balls, Yorkers, Slower balls, Curtly Ambrose was a complete modern bowler in the 1990s.

Curtly Ambrose’s yorkers were his speciality. The Antigua-born bowler used this to pick up 405 wickets in just 98 Test matches. Hence without a doubt Curtly Ambrose makes it in our list of the best yorker bowlers in the world.

Arguably the best yorker bowler in the world currently, Jasprit Bumrah has already left his mark in the cricketing world. Bumrah’s ability to vary his line and length so comfortably has made him a deadly bowler both in the limited format and the Test format of the game.

Jasprit Bumrah has specialized in the art of death bowling and his yorkers have only gotten even more accurate over time. Hence the 28-year-old bowler still has a lot of time in hand to become one of the best yorker bowlers of all time.

Coming in at number 9 is  Mitchell Starc. The Australian pacer is one of the most exciting bowlers in the cricket world at the moment. The 32-year-old bowler combines raw pace along with his accurate yorker abilities to make the difference.

At the age of 32, Starc has already impressed a lot of people with his abilities. Hence it has to be seen if Mitchell Starc can rise even higher in this list and become the best yorker bowler in the world to ever grace the game.

Another Aussie that makes this list is the speedster, Shaun Tait. Having burst onto the scene as a pure pace bowler, Tait was already dangerous with his pace. But he went on to improve that even more in the coming years as he developed his yorker even more.

Just imagine facing a yorker at speeds of around 150-155! Scary right! Well, that is what Shaun Tait did best. Sadly injuries took their toll on his body and he could never stay at his full potential for long.