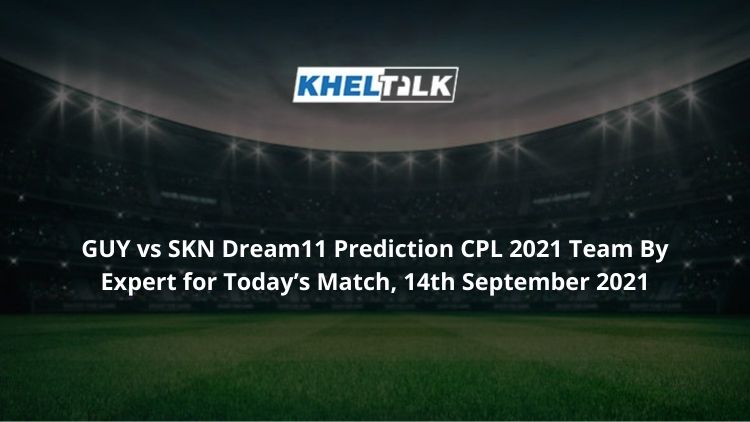 Amazon Warriors and St Kitts and Nevis Patriots will face once again in the tournament. During their last head-to-head meet, the table was literally upside down. Warriors had won only two out of their five matches at that time and one of them came in super over.

On the other hand, the Patriots won five out of five at the moment, thanks to Rutherford, who had three fifties in that five outings. However, when he had failed to perform, the team failed too and they had won only one match in their last five contest.

Amazon Warriors had a different tournament in the second half. They came back stronger and have won four out of their last five contests.

The pitch has supported the bowlers right from the beginning but there is something for the batters in recent times. This is the second match and as the pitch got older, the batting looks a bit easier compared to the evening match.

We are in for a cloudy day here. One can expect the temperature to be around 32 degrees Celcius for the most part of the day. There is almost zero percent chance for rain today during the night.

Evin Lewis recently smashed a ton and he will be the key here once again. Rutherford will be looking to regain his form as well. The team might go in for an extra bowler here, might pick Jaggesar.

The best part of the Amazon Warriors team is that there is no individual performances. The team has done well collectively and in every single match, there was a new star. From Tahir to Motie.

Evin Lewis recently smashed a ton in this tournament and is likely to do well here. He has 343 runs from nine matches with an average close to 43. He has 30 sixes to his name so far.

Rutherford will be keen to get back to scoring ways here. He had scored three fifties in the start of the tournament but couldn’t add more to that tally. He has 226 runs so far.

Fabian Allen is more of a utility player available here. He has scored 117 runs from nine innings with a strike rate close to 137. He also has eight wickets to his name.

Drakes is the leading wicket-taker of the team and is a mandatory pick here in this contest. He has 13 wickets to his name at the moment. He is also useful with the bat.

Nicholas Pooran batted well in the last match and is likely to carry his form here as well. He has 237 runs from his nine innings with an average close to 34 in the tournament.

Mohammad Hafeez has played only eight matches but has done well so far. He has 179 runs to his name with an average close to 30 and also has picked up five wickets.

Imran Tahir needs no introduction. The veteran bowler will be leading the bowling attack of the team today. He has picked up 13 wickets to his name while giving away six runs per over.

Shepherd could prove vital in this contest. He is the leading wicket-taker of the team at the moment with 18 wickets to his name. He also has 108 runs with the best of 72* in the tournament here.

Who Will Win Today Between GUY vs SKN Dream11 Prediction, Semifinal 2?

According to Kheltalk’s astrology GUY vs SKN Dream11 match Prediction, the Patriots will begin this contest as the favorites to win this contest. They might have lost their way in the second half of the tournament but they are capable of winning this contest with ease.

According to Kheltalk’s GUY vs SKN Dream11 toss prediction, the Warriors will win the toss and will bowl first here. Since the pitch will assist the bowlers more, the teams are likely to bowl first here.