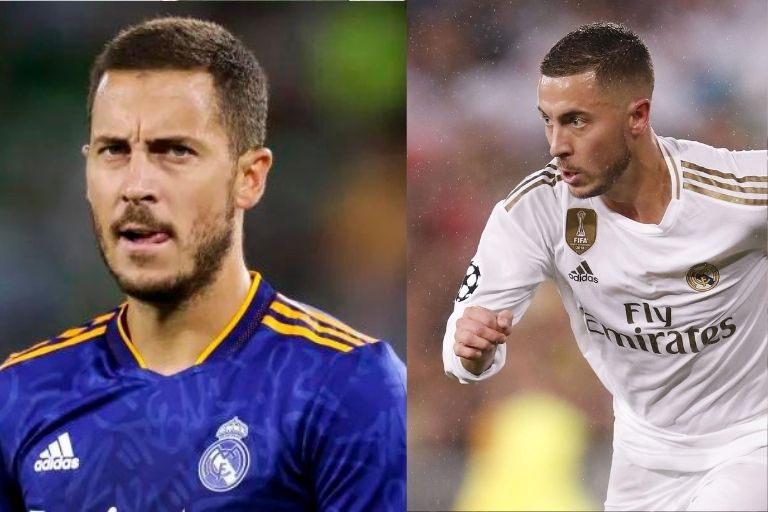 Eden Hazard’s current net worth as of 2022 is around 100 Million dollars and in the year 2022, he is one of the richest footballers in the world. He plays as an attacking midfielder(left) in Real Madrid and a left-winger for Belgium’s national team. His mesmerizing control and insane dribbling ability on the ball makes him a force to be reckoned with and gives opposition defenders nightmares when they face him. Because of his creativity and dribbling ability on the ball, he is easily one of the best players in the world in his position.

The Belgian attacker’s current net worth stands at around 100 million dollars, which makes him one of the richest footballers in the world. Because of his improvement in his overall game in his football, his net worth began to increase year by year and is set to increase for years to come.

He was a superstar for Chelsea and was a major factor for Chelsea winning the English premier league in 2014/2015 and 2016/17 season respectively. In 2019, Hazard was signed by Real Madrid for a staggering amount of 157 Million Euros, as the ideal replacement for their club legend, Cristiano Ronaldo, who departed to Juventus FC. According to statistical reports, The Belgian earns around 11 million per year in Las Blancos, and his contract with the Spanish giants will end in 2024. Here is a tabular representation of Eden Hazard’s net worth over the years:-

The Belgian Superstar has been endorsing the American Sportswear brand, NIKE, for a very long time and also endorses Sina’s sports(Chinese sports manufacturing company), Biscoff Brand(Belgian Biscuits Brand), and EA Sports(FIFA). He earns around 6 million Dollars from all his endorsement deals.

Because of his massive popularity among today’s young generation, he has been on the front cover of two editions of FIFA Games, manufactured by EA Sports: FIFA 15 and FIFA 20 respectively. He regularly promotes his sponsors on social media platforms like Instagram, Facebook, and Twitter respectively. Here is a tabular representation of his Endorsements and the amount he earns from them.

Born with an immaculate talent to go past opposition defenders with his extraordinary dribbling skills and control on the ball, Hazard has had a brilliant professional career as a footballer so far. He started his professional football career in 2003, by moving to Tubize(Belgium First Division B club). He trained and honed his skills there for two years.

In 2005, He headed to France, to join Lille(First division Club in Ligue 1). After spending two years with the club’s training academy, he signed his first contract for the French side on 28th May 2007. By this time, he had already represented Belgium national football team at several youth levels: Under -15 and Under-16 sides, respectively. He has 37 games at the youth level of the Belgium National team and has scored 11 goals.

He received his first senior call for Lille in 2007. The French side was playing a friendly and several senior and well-established players were on international duty at that time. However, his professional debut came on 24th November. 2007, coming on as a replacement in the 78th minute of the game. On 19th November 2008, Hazard made his first international debut for the senior team of Belgium, replacing Wesley Sonck in the 70th minute, against Luxembourg. This was an indication that Hazard is beginning to reach his prime stage and is ready to play for the Belgium National team at the senior level.

Because of his rapid promotion to the Belgium senior team, he was permanently promoted to the senior team of Lille for the 2008-2009 season. On 20th September 2008, he scored his first senior goal for the French side against Auxerre, which lead to Lille winning the game 3-2. He scored his first match-winning goal against Sochaux in February 2009 and on 22nd February 2009, he provided his first match-winning assist against AS Monaco.

Because of his brilliant performance for Lille in the French league, he was awarded the UNFP player of the year for the second season in a row, in the 9th of May, 2009 He missed out on the prestigious player of the year award, by a few inches that season.

He established himself as a young talent and perhaps one of the best youth prospects in the footballing world at that time. So, Chelsea, one of the best English football clubs in the world, signed him on 4th June 2012. He made his championship debut for Chelsea against Juventus at the beginning of the 2012-2013 season. However,  his first professional goal came for Chelsea on 6th October in a 4-1 rout of Norwich City. He was already the best player in Chelsea and was the main creative force of the team. Because of his brilliant season with Chelsea in the first season, he was shortlisted for FIFA Ballon d’Or, 2013.

In the 2013/14 season of the English premier league, he was world-class, scoring goals consecutively in a back to back games against Swansea, Liverpool, and Hull City. Because of his improved goal-scoring prowess in front of goal, he scored his first hattrick for Chelsea in a 3-0 win over New Castle United FC. Eventually, he won the PFA Young Player Of The Year award for the amazing performances he exhibited throughout the season and finished runner-up for the PFA Player Of The Year Award.

Because of his creative and attacking brilliance, Chelsea won the Premier League for two seasons:2014/15 season and 2016/17 season, respectively. He was awarded Chelsea player of the year in 2015 for his success with the English Giants. In 2017, he led Chelsea to their 12th  win in a row, achieving a new club record. He scored his 50th goal against AFC Bournemouth FC and drubbed them 3-0. Because of his success with the team, Chelsea again won the English Premier League championship in 2017. He was named in the PFA‘s team of the year that season, which makes his record count of 4 times.

He represented Belgium for the First time in the FIFA world cup in 2014. He was a key player for Belgium throughout the tournament and helped the team reach the Quarterfinals of the competition. He captained for the Belgium national team for the first time against France on 7th June 2015. He got this opportunity to captain, as Vincent Kompany, Belgium’s captain was suspended. He scored the winning goal against France and won the game 4-3.

Because of his leadership qualities, he was made the permanent captain for the Belgium national team. With his captaincy,  Belgium reached the quarterfinals of the EURO 2016 and in the semi-finals of FIFA World Cup, 2018.

In, 2019, He later was signed by Real Madrid, which is the best European club in the world with the most UEFA championship titles. He did not achieve success over there because of injuries. In his current spell with Real Madrid, he has scored 5 goals across all competition.

Hazard, although playing as an attacking midfielder has goalscoring numbers as close to a striker. He has scored 68 goals and provided 45 assists in his 200 games for Chelsea and for the French side, Lille, he scored 36 goals in 147 Ligue 1 games. Overall he has scored 137 goals in 485 matches for club and international leagues. In international football, he has scored 21 goals in 82 games for Belgium, which is a world-class number.

Here is a Tabular representation of Hazard’s all-time career stats:-

Natacha Van Honacker is the woman that made Hazard fall in love with her ever since her teenage days. They began their relationship when they were 14 years old and have married each other too. Natacha is a very private person and she doesn’t like to be the center of the spotlight. She is currently 29 years of age and is seen supporting Hazard in all his matches. It was because of her conviction, that Hazard decided to join Real Madrid from Chelsea in 2019.

Hazard is really famous all around the world with a net worth of 100 Million dollars. Because of such high wages, he is one of the richest footballers in the world today. He owns a luxurious villa in Spain, which is worth around 1.1 million dollars.

He is a massive petrolhead and owns a wide variety of luxury supercars in his garage. Here is a tabular representation of luxury items owned by Eden Hazard:-

Some facts about Hazard’s personal life

Hazard is introverted and is really passionate about football. He tries to give his best every match and believes in contributing to the team with his creativity in assisting and in goals. Outside the glitz and glamour of football, the Belgian forward likes to spend time with his family and friends. He plays football for the enjoyment of the game and does not value personal glory. In his mind, if he no longer enjoys playing football, he would quit and do something else.

Hazard is known for his vision, passing, creativity, Dribbling ability on the ball and is fairly regarded as one of the best payers in the world today. In the 2010/11 season, he was part of the Lille team that won the domestic double in France. Because of this achievement, he was named the Ligue 1 player of the year, the youngest to do so.

In his memorable spell with Chelsea, he has won major trophies professional football has to offer such as the UEFA Europa League, League, and 2 premier league titles. Because of his achievements with Chelsea FC, he won a lot of individual trophies such as FWA Footballer Of the Year and the PFA Players’ player of the year award. In 2018, because of Chelsea winning the prestigious English FA cup and his amazing performance for Belgium in the FIFA world cup, He was named in the FIFA FIFPro World XI.

Here is a tabular representation of major individual titles won by Hazard over the years:-

Any team with Eden Hazard in it is bound to win major trophies and titles. He has won his first domestic double with Lille(winning Ligue 1 and French cup), because of which he was named the Ligue 1 player of the season. His trophy count increase when he joined Chelsea and demolished the coveted English Premier League.

Here is a tabular representation of all the titles Hazard has won for his club and country:

1. What is Hazard’s Favourite food?

3. What is Hazard’s favorite genre of music?

4. At what age did Hazard started playing football?

5. How many brothers does Hazard have?

Ans- Hazard has three brothers(Thorgan Hazard, Kylian Hazard, and Ethan Hazard) who are all professional footballers