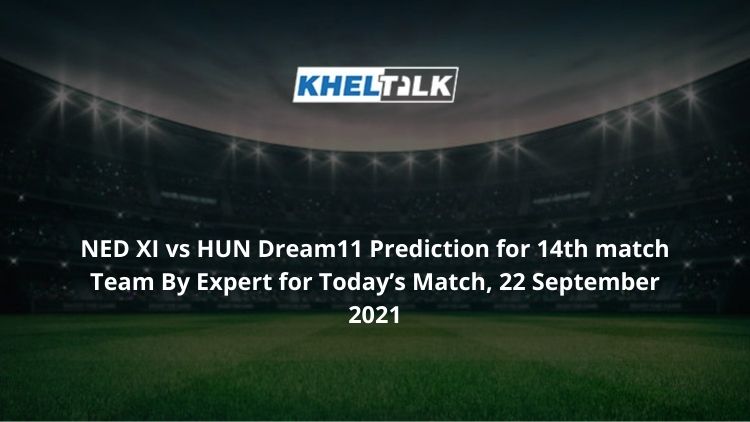 Netherlands XI and Hungary will lock horns in the 14th match of the tournament today. Netherlands XI is the best team in the Group B of the ECC T10. They have played four matches so far and are undefeated in the tournament at the moment. One can expect them to dominate here as well. They are currently at the top of the table.

On the other hand, Hungary are at the third spot in the points table with a couple of wins and as many losses to their name. Both their wins came against Portugal.

The pitch is a moThe pitch will assist the batters more. From what we have seen so far, there will be a huge amount of support for the batters and one can expect both teams to go for chasing here.

Rain is on cards on Wednesday at Cartama Oval. The temperature will be around 18 degrees Celcius and will go down as the day goes by. One can expect rain interruption in today’s contest

Netherlands XI will be looking to continue their dominance in the tournament. They are unbeaten so far and all their wins came against different teams. They are likely to go in with the same eleven here.

Hungary does have an excellent line-up and they are capable of winning matches with ease. They did that twice against Portugal but in all the other matches, they couldn’t get through. One of the major concerns is their fielding.

Clayton Floyd is one of the must-have picks in this contest. He can contribute from both fronts and is doing well at the moment. He has 162 runs as well as six wickets to his name.

Julian Dey Mey has been outstanding with the ball and is likely to continue his form here as well. He has managed to pick up nine wickets so far and is also useful with the bat.

Safi Zahir is doing well with the bat at the moment. He has managed to gather 101 runs so far and is likely to dominate today. He is also a useful option with the ball.

Musa Ahmed’s all-round ability makes him one of the must-have picks here. He has managed to score 87 runs as well as has a couple of wickets in the tournament so far.

Boris Gorlee could prove vital in this contest. He is an attacking option available here. From his three outings, he has 96 runs including a half-century. He has a strike rate close to 182 in this tournament.

Sebastiaan Braat is yet to showcase his talent here. He is one of the well-known players available in this contest. He has managed to score 54 runs so far. However, his strike rate will tell you the kind of batter he is. He has 234.78 strike rate here.

Head To Head Team For NED XI vs HUN

Who Will Win Today between NED XI vs HUN Dream11 Prediction, 14th Match?

According to Khel Talk’s prediction for NED XI vs HUN Dream11 Match Prediction, Netherlands XI is likely to win this match because of their line-up. They are in good form at the moment and are unbeaten in the tournament so far. They are likely to do well here. However, they will not take Hungary lightly as they can spring surprises.

According to Kheltalk’s NED XI vs HUN Dream11 Toss Prediction, Hungary would win the toss and elect to field first. The batting on this surface would get easier in the 2nd innings and most of the matches are won by the team batting second.