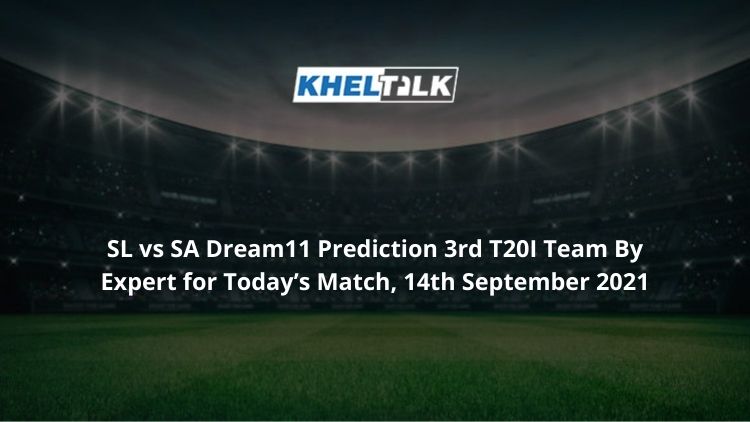 Well, South Africa has won the t20 series by 2-0 and now they would want to test their bench strength for the upcoming T20 World Cup. On the other hand, Sri Lanka would be disappointed with the loss in the last game. Despite playing in their home conditions, Sri Lanka was completely outplayed. Now they would give in all to notch this third T20 game to keep themselves motivated.

The surface is slow in nature with a little bit of bounce and turns for the spinners. We have seen in the previous two games, spinners have been more effective. Big boundaries prevent many sixtysomething around 140-150 can be a pretty difficult score to chase down at this venue.

It is going to be cloudy in Colombo. The temperature will be around 31 to 34 degrees Celcius and there is a slight chance for rain but it is unlikely to take over the day.

South Africa would be highly motivated after a comprehensive win in the last game. Tabraiz Shamsi, Bjorn Fortuin, and Keshav Maharaj were lethal with the ball. They have a better bowling attack than Sri Lankans. de Kock scored a half-century in the last game. Apart from him, other top-order batsmen have got runs including Aiden Markram, Reeza Hendricks, and David Miller. South Africa might try their bench strength now.

The surface has helped the spinners more and things were supposed to be in favor of Sri Lanka as seen in the ODIs. However, Sri Lankan batsmen have miserably failed with the bat. Only Dinesh Chandimal has scored a fifty for Sri Lanka so far. Kusal Perera looked decent in the previous games but was out. With some planning, they could easily go past 150 runs mark. None of the bowlers were impactful. Only, Wanindu Hasaranga has picked up three wickets and has been the most economical bowler so far.

De Kock looks in formidable form. In two innings, he has hammered 94 runs with the highest score of unbeaten 58. So far, he has smashed 10 fours and a six in the T20 series.

A Markram has been one reliable allrounder. He has scored 69 runs in two innings with the highest score of 48 and this part-time off-spinner has also chipped three wickets to her name.

T20 best bowler – T Shamsi has chipped four wickets in two innings with the best figure of 3/20 and currently holds an economy of 6.66. No doubt, he has troubled the batsmen but must work on his economy.

D Chandimal has scored 71 runs in two-inning with the highest score of unbeaten 66. He looks in sublime form and will surely deliver in the upcoming game. So far, he has smashed five fours and two sixes.

K Perera looked decent with the bat after his return to the international crickets. He scored 3 runs in the previous game. Perera is one experienced man in the squad and will surely make some difference.

de Silva has chipped three wickets in two innings for Lankans. His best figure in this series is 2/23 and holds an economy of 5.52.

Who Will Win Today Between SL vs SA Dream11 Prediction, 3rd match?

According to Kheltalk’s astrology SL vs SA Dream11 match Prediction, South Africa will begin this contest as favorites once again. Their bowling department is more prepared when compared with Lankan’s attack. Lankans won’t be able to create many hurdles for Africans.

According to Kheltalk’s SL vs SA Dream11 toss prediction, South Africa is likely to bowl first at this venue. The last three games at this venue have been won by the teams batting second.